During AUVSI’s Xponential conference and exhibition in Denver, the North Carolina Department of Transportation was informed that it had been selected as one of the 10 participants for the FAA’s UAS Integration Pilot Program (IPP).

The main focus of NCDOT’s proposal for the UAS IPP is working with global drone delivery companies to establish a network of medical distribution centers that can use drones to make medical deliveries, says Basil Yap, the head of NCDOT’s UAS program and lead on the IPP work.

Currently, couriers are the primary form of transport of blood and other supplies to hospitals and testing facilities, but NCDOT believes that UAS could get these supplies and test results to medical providers much faster.

North Carolina is no stranger to UAS or associated technology, Yap says, as the state launched a program that actively focused on integrating UAS into the North Carolina airspace back in 2014. Naturally, when the UAS IPP was announced last year, it was a no-brainer for NCDOT to apply for the program.

“We welcomed the opportunity to work with the FAA to shape the future and enable the full benefits of this technology,” Yap tells Unmanned Systems.

With the state of North Carolina boasting a strong medical presence, specifically in the areas of Raleigh and Durham, Yap notes, NCDOT identified medical deliveries as an interest to the FAA during early discussions.

Soon after identifying this area of interest, North Carolina was approached by several companies that have been conducting these very operations on a regular basis overseas.

NCDOT’s three anchor partners for the UAS IPP are Zipline, Matternet and Flytrex. Each of these companies has ample experience conducting UAS delivery operations outside of the U.S.

Zipline has established what it says is the world’s only UAS delivery system at national scale to send urgent medicines to those in need no matter where they live (with its primary operations taking place in Rwanda); Matternet operates in Switzerland as part of a full-time operation transporting blood samples using UAS; and Flytrex deployed the world's first UAS delivery route in an urban environment in the city of Reykjavik, Iceland.

On Aug. 29, NCDOT’s Division of Aviation teamed up with WakeMed Health & Hospitals and Matternet to conduct the first round of test flights for UAS to carry simulated medical packages from Raleigh Medical Park, located across from WakeMed Raleigh Campus, to a main tower at the hospital.

The flights went off without a hitch, which is of the utmost importance to Matternet, according to Ben Hansen, the company’s head of business development.

“The thing that matters the most for Matternet is safety,” Hansen tells Unmanned Systems.

Hansen says that before flights are performed, a rigorous site assessment is conducted. For these initial flights, all risks were mitigated, and the flight demo was successful as the Matternet system took off from one of WakeMed’s facilities and landed on the main roof of the hospital building.

Matternet and WakeMed have an ongoing relationship, so when the IPP launched, Matternet approached NCDOT about partnering, and brought WakeMed, the leading provider of health services in Wake County, North Carolina and home to the area’s only Level I Trauma Center, into the fold.

“We see the value that drones can provide in transportation of high importance medical supplies,” Hansen says.

Soon, NCDOT will work with another partner, Flytrex, as the company will provide an on-demand UAS delivery service to the residents of Holly Springs, North Carolina.

According to Amit Regev, co-founder and VP of product at Flytrex, the company will start slowly with a single UAS delivery route connecting a shopping center with a public drop-off location nearby.

Residents will have access to an online ordering app where they'd be able to order food from restaurants located in the center. When processing the order, the customers will choose the pickup location of their choice. For the first phase of the pilot project, there will be just one drop-off location in the town.

This pilot project is just the opportunity that Flytrex was looking for when it first became interested in conducting its operations in the United States.

“After operating for more than a year outside the U.S., we were looking to enter the U.S. market and introduce our technology to the U.S. suburbs,” Regev tells Unmanned Systems via email.

“The FAA UAS Integration Pilot Program is a great opportunity for us to prove the abundant benefits associated with drone delivery, such as boosting the local businesses, creating new job opportunities, and providing a greener and more efficient solution for last-mile deliveries.”

With so many UAS poised to hit the sky during the program, a system needs to be in place to track their operations, which is why NCDOT has also partnered with AirMap and PrecisionHawk to develop unmanned traffic management (UTM) systems that track UAS as they fly.

North Carolina will have a statewide UTM to see data from partners when they’re operating, with help from the companies.

“UTM is really key to the expansion of this program because you want to make sure that communication between manned and aircraft is well coordinated,” Yap says. “The future of package delivery in urban environments will rely on UTM.”

By the end of the UAS IPP, NCDOT’s three anchor partners will be routinely operating UAS in the state, Yap hopes, having developed business models that allows them to be compensated for their flights.

“That’s why we’re excited to partner with companies operating overseas, because they already have the business model in place,” Yap says.

In order for this to become a reality, though, NCDOT realizes that it will need to maintain an open dialogue with the community to ease any concerns about these operations. With this in mind, Yap says NCDOT will hold regular demonstrations in the community, as well as public outreach events, so that people can learn about the program, and ask questions or submit comments to NCDOT.

The first public meeting was held on Aug. 30, the day after the first flights.

If the community accepts this technology and realizes the benefits of these operations, NCDOT and its partners will achieve their goals of making these operations a regular occurrence in the state.

“We don’t anticipate that once the program is over these operations will stop; in fact, we hope the operations increase,” Yap says. 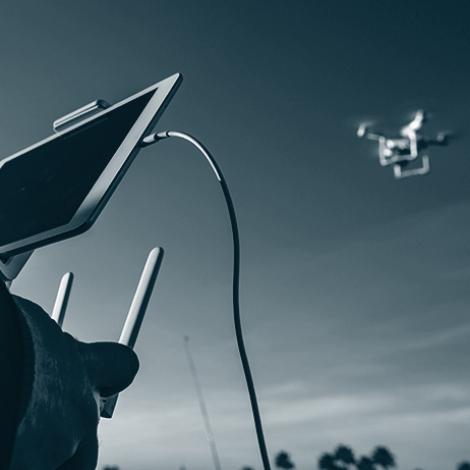