Stanford University researchers have developed a soft robot that borrows features from traditional robotics to stay safe while still retaining the ability to move and change shape.

“A significant limitation of most soft robots is that they have to be attached to a bulky air compressor or plugged into a wall, which prevents them from moving,” explains Nathan Usevitch, a graduate student in mechanical engineering at Stanford.

“So, we wondered: What if we kept the same amount of air within the robot all the time?”

From the beginning, the researchers ended up with a human-scale soft robot that can change its shape, which allows it to grab and handle objects and roll in controllable directions.

“The casual description of this robot that I give to people is Baymax from the movie Big Hero 6 mixed with Transformers. In other words, a soft, human-safe robot mixed with robots that can dramatically change their shape,” Usevitch says.

According to the researchers, the simplest version of this squishy robot is an inflated tube that runs through three small machines that pinch it into a triangle shape. One machine holds the two ends of the tube together while the other two machines drive along the tube, changing the overall shape of the robot by moving its corners. The robot is referred to as an “isoperimetric robot” because the total length of the edges—and the amount of air inside—remains the same, even though the shape changes dramatically.

According to the researchers, the isoperimetric robot is a descendent of three types of robots: soft robots, which are lightweight and compliant; truss robots, which have geometric forms that can change shape; and collective robots, which are small robots that work together, and as a result are especially strong in the face of single-part failures.

“It makes for a really interesting class of robots that combines many of the benefits of soft robots with all of the knowledge we have about more classic robots.”

A more complex version of the robot can be made by attaching several triangles together. By coordinating the movements of the different motors, the robot can perform various behaviors such as picking up a ball by engulfing it on three sides or altering the robot’s center of mass to make it roll.

“What’s exciting to me is that the robot is actually a collective of individual robotic rollers, which work together to move the robot and change its shape,” explains Mac Schwager, assistant professor of aeronautics and astronautics and co-author of the paper. “This helps make it an adaptable and robust system.”

Researchers believe that one of the robot's many potential use cases could be for space exploration.

“This robot could be really useful for space exploration – especially because it can be transported in a small package and then operates untethered after it inflates,” says Zachary Hammond, a graduate student in mechanical engineering at Stanford and co-lead author of the paper, with Usevitch.

“On another planet, it could use its shape-changing ability to traverse complicated environments, squeezing through tight spaces and spreading over obstacles.”

As of right now, researchers are experimenting with different shapes for their robot, and they are considering putting it in the water to see if it can swim. Researchers are also looking into additional new soft robot types that have their own features and benefits.

“This research highlights the power of thinking about how to design and build robots in new ways,” says Allison Okamura, professor of mechanical engineering and co-author of the paper.

“The creativity of robot design is expanding with this type of system and that’s something we’d really like to encourage in the robotics field.” 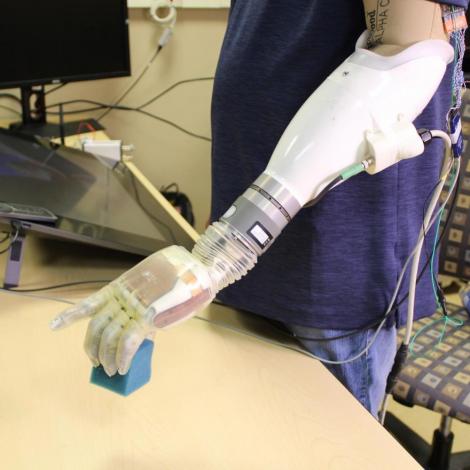