We are often asked to compare the hourly cost of manned flights with the equivalent cost of unmanned aircraft systems (UAS).  This is not an easy question to answer because there is not a standardized and accepted protocol for calculating costs per flight hour.  Further, there are numerous ways that costs per flight hour may be calculated because of the varying metrics that may be included in such a calculation. And, most importantly, when upgrading operations, it is often not just the platform that is upgraded but the entire operation is overhauled and the UAS is used differently than its manned predecessor.

Nonetheless, this is an important question because as more and more UAS are utilized domestically, the price per hour will drop dramatically and serve as a valued metric when supporting future customers.  Further, it is likely that customers may be more interested in leasing services by the hour and not in buying the platforms themselves.

Why is Comparing Cost per Hour so Hard?

Some sales tips when comparing manned and unmanned operations:

Case Study: Bureau of Land Management Use of UAS

The data presented here are from a presentation at AUVSI’s Unmanned Systems 2013 by Jeff Safran and Lance Brady, Department of the Interior, Bureau of Land Management (BLM) 1, as part of their close-range photogrammetric mission.  The BLM is the largest land management agency in the U.S. with over 245 million surface acres (700 million subsurface acres) representing 1/8 the land mass of the U.S.

The BLM Aviation Program is a large manned program focused on safety, dispatch and mission support and is centered at the National Interagency Fire Center in Boise, Idaho.  Overall guidance of the program falls at the DOI – Office of Aviation Services.  The BLM Aviation Plan includes the use of unmanned aircraft (see http://www.blm.gov/style/medialib/blm/nifc/aviation/administration.Par.39484.File.dat/NAP.pdf for details) and the DOI unmanned pilot training and safety inspections programs have been approved by the Federal Aviation Administration (FAA).  An unmanned systems project takes approximately 1 year from initiation to final approval.

BLM has historically tried using sophisticated equipment on manned helicopters to obtain the resolution of interest.  But because of safety concerns, they don’t want a person in an aircraft flying at an altitude of 50-100 feet.  It is noted that the number one cause of death of a wildlife worker is an aviation-related incident (power line strikes—bird strikes—collision with terrain).  UAS can mitigate this danger.

The first two platforms flown by the BLM was the RQ-11A Raven and the RQ-16 T-Hawk (both provided by the U.S. Army).  The T-Hawk is loud so it is not used for wildlife surveys except to move animals to a designated area.

The Sandhill Crane Population Survey was a joint project with the United States Geological Survey.  Previous surveys were ocular counts conducted in a Cessna 172 or 206 under daylight conditions above the U.S. Fish and Wildlife Refuge.  A manned Cessna ocular survey costs the BLM about $4,300.  And while the counts could be conducted in just a few flights, the main expense was getting the Cessna to the refuge.

At the time of this survey, the BLM also contracted out for a remote sensing contractor to do the same survey using a fixed-wing aircraft.  That contractor’s price for performing the work was $35,000.

During the day the birds are dispersed throughout the wildlife refuge so it is difficult to get an accurate count.  However, at night, these birds come back to their roost sites so it is easier to count the birds and with greater accuracy.

Ultimately, the UAS crew performed the population survey at night at about 300 feet using thermal imaging from the Raven at a cost of $2,600 for the imagery and about 2 hours to post-process the images.  The Raven is electric powered so the sound did not disturb the birds.  The data provided by the UAS was the most accurate Sandhill Crane count ever conducted.

As seen in the chart below, the BLM had a cost-effective reason for using the UAS and achieved the most accurate Sandhill Crane population count conducted to date.

The Mesa County Landfill Project is collaboration between the BLM, USGS and the Colorado Mesa County Sheriffs’ Department.  The Department has a county-wide Certificate of Authorization (COA) for emergencies.  The County has to write an EPA report on a quarterly basis on the amount of material in their landfill (volumetric compliance inspection).  This is an expensive project as it costs the County about $10,000 for a contractor to fly the project.  Flying their Falcon and Dragonflyer under their COA, the BLM flew the project for about $300.

Similar to the landfill operation, Mesa County also has to perform compliance inspections for volumetrics on their gravel pit.  The county has the same contractor cost here as for the landfill project, about $10,000.  Again flying under the County’s COA, the BLM was able to provide photogrammetric expertise to the County for about $120.

The BLM is continuing to test and evaluate UAS systems but continue to face bureaucratic challenges. Since unmanned systems are part of the manned aircraft program, BLM staff have to provide the same justification to buy a $5,000 UAS as they do to buy a Beechcraft KingAir at >100x cost.

While there has been much anecdotal evidence that UAS are more cost effective than manned flights, this is among the first direct evidence that this is, in fact, the case.  If any of our members have similar data comparing manned flights to UAS performing the same mission, we would appreciate hearing from you.

Although unmanned vs. manned per flight hour costs are not standardized and therefore cannot be utilized as a direct comparison, this section presents unit and per hour flight costs for manned and unmanned aircraft systems from various sources.  Operating price per hour and cost of maintenance are two of the many metrics that can be utilized to better understand where manned systems should be used and where unmanned systems can be more effective and efficient.  The following unit and flight hour operational costs were found in a quick review of the literature and are provided only for illustration purposes and not for direct comparison.

The Government Accountability Office (GAO), in a report on border security, (http://www.gao.gov/products/GAO-12-657T) stated that the Department of Defense (DOD) reported in fiscal year 2011 that the Predator UAS cost $859/flight hour and the Reaper $1,456/flight hour.  GAO further reported that DOD used maintenance costs, asset utilization costs, and military personnel costs in their calculations.  It is noted that many other factors may impact actual operating cost and there is not a standardized method for performing this calculation.  For example, direct operating costs may also include such items as maintenance, fuel and lubricants. However, these costs are dependent upon hours flown.  To this may be added hanger, maintenance and personnel costs (direct and indirect) including operators, mechanics and administrators of the program.  Some cost estimates may include depreciation and the present value of the costs per contract divided by the average contract length in order to estimate total operational costs.  Therefore, it is not surprising that one can find highly variable cost estimates for the same UAS (see Hiesterman, http://www.washingtoninstitute.net/ftpFiles/StudentFinalProjectReports/TFM24/WardHiesterman.pdf  for a detailed cost effectiveness analysis of helicopter contracting practices).

Although not directly comparable, the GAO also reported that a manned Blackhawk helicopter cost $5,897/flight hour and a C-12 $1,370/flight hour.  These aircraft are similar to those used for border security.  To develop these per hour estimates, the DoD used maintenance, asset utilization, and military personnel costs.

Aviation International News (http://www.ainonline.com/aviation-news/ain-defense-perspective/2012-04-20/k-max-proves-unmanned-heli-lift-afghanistan) reports the logistics transport K-Max unmanned helicopters being used in Afghanistan by United States (U.S.) Marines have a cost of maintenance less than $1,200 per hour and 0.8 maintenance man-hours per flight hour.

The Sikorsky S-76, used by EMS and the Port Authority of New York and New Jersey (two S-76’s) for security, has cost the city $4 million/year at a cost of $15.5K/flight hour (http://blogs.law.harvard.edu/philg/2010/07/17/government-versus-private-industry-helicopter-operating-costs).

According to the US Air Force a Predator B UAS has a unit cost of about $4.026 million (http://www.saffm.hq.af.mil/shared/media/document/AFD-100128-072.pdf) and an operating cost of approximately $3,234/flight hour.  A modified Predator B was utilized by NASA to assist firefighters in pinpointing hot spots and obtaining ground temperatures during the 2007 California Zaca and Mount Palomar Observatory (vicinity) fires (http://machinedesign.com/print/73728 and (http://machinedesign.com/article/newest-forest-firefighter-predator-uav-1121).

It is noted that a single Raven has a price estimate of from $35K (http://www.globalsecurity.org/intell/systems/raven.htm) to $250K - $439K for the entire system (http://www.robinsonheli.com/price_lists_eocs/r44_2_eoc.pdf).  This demonstrates the difficulty in assessing the true operational cost per flight hour of both manned and unmanned systems.  Such estimates should be from primary reference sources and reflect all assumptions and factors utilized in the calculations.

The below chart summarizes the platform, primary use, unit cost and cost per flight hour for several manned and unmanned aircraft systems but does not include the metrics utilized for estimating these costs.  It should be remembered that these costs are not directly comparable and should only be used as rough estimates to start a comparison.

(Update: 10/29) Found some more data from the US Air Force Comptroller (via Time): 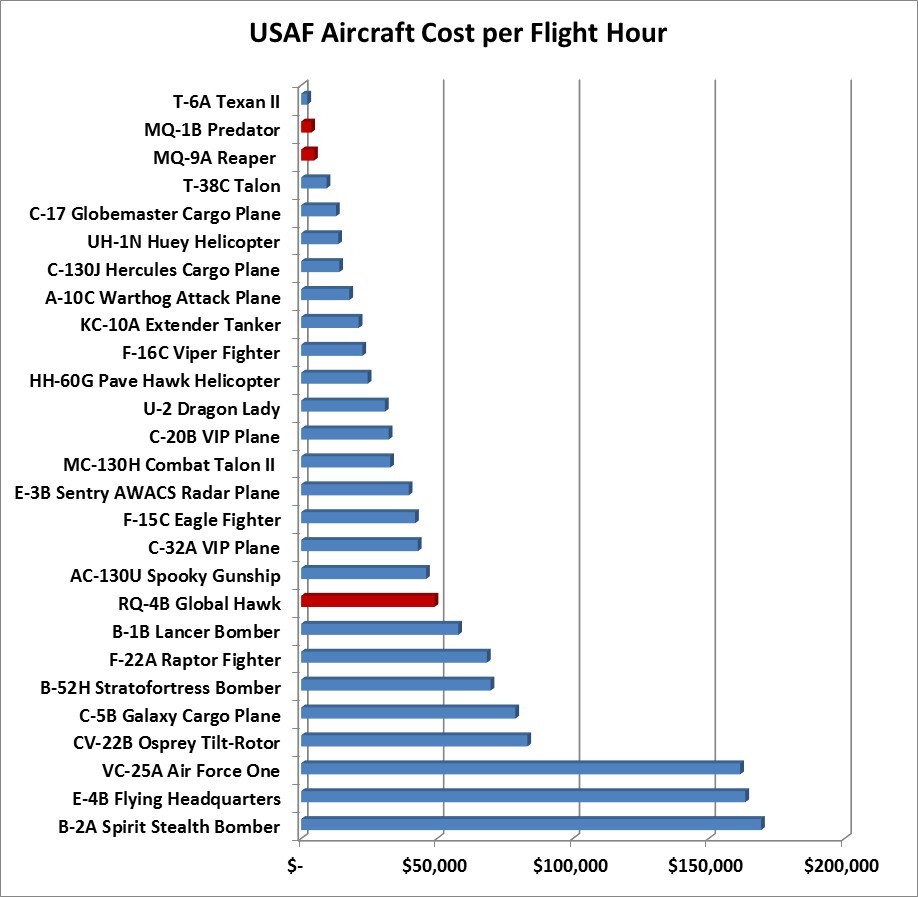