For Fiscal Year 2019 (FY2019), President Donald J. Trump has requested $686 billion to fund the U.S. Department of Defense (DoD). This is an increase of approximately $74 billion from FY2018 and will support the current national security and defense strategies. Unmanned systems and robotics are key technology areas that enable the United States to counter the range of evolving threats posed on the modern battlefield. A comprehensive review of the budget documents for each service/department/agency in the DoD has been completed to identify all programs that support operations of unmanned systems. Through the National Defense Authorization Act (NDAA), Congress reviews the President’s Budget and makes changes relative to the initial funding requests. This research will provide insight into the requested funding for both procurement and research, development, test and evaluation (RDT&E) of unmanned systems and robotics.

It is estimated that the requested funding for unmanned systems and associated technologies in FY2019 increased 28 percent from FY2018 to $9.6 billion across all agencies in the DoD (approximately 1.4% of the total DoD budget). This increase of over $2.1 billion represents all unclassified programs, including overseas contingency operations (OCO). Separating the totals by funding type shows an almost even distribution, with $4.9 billion supporting RDT&E and $4.7 billion for procurement. Two figures have been provided below that separate the budget for unmanned systems by domain and by service (the “Other” category in service represents DARPA, OSD, SOCOM, etc.). Each service shows growth from FY2018 to FY2019, with the Navy experiencing the largest increase at over $1 billion. Relative to domain of operation, air is receiving the largest funding support with the budget for unmanned aircraft reaching almost $7 billion in FY2019, followed by $1.5 billion for counter-unmanned systems (C-UxS), $1.3 billion for unmanned maritime vehicles and $0.7 billion for ground robotics (these domain totals are slightly higher than actual values as they include programs that fund multiple domains). From FY2018 to FY2019, the expected budget for C-UxS technologies almost doubles. 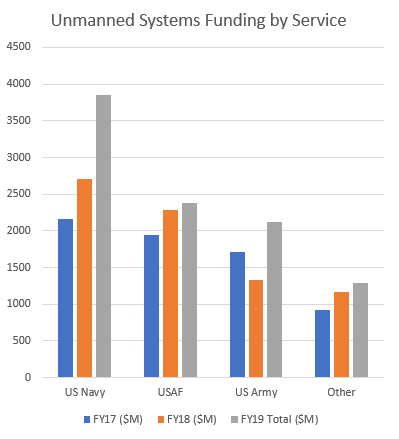 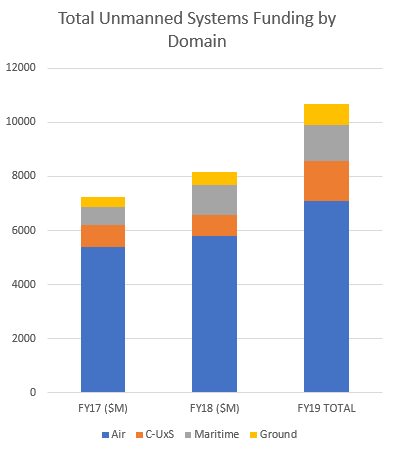 The National Defense Authorization Act (NDAA) is passed each year to specify the funding provided to the DoD. This legislation uses the President’s Budget request as a baseline and then recommends funding changes as the congressional committees see fit. Both the House and Senate Armed Services Committees submitted versions of the NDAA. The final conference report is a compromise of the House and Senate recommendations and was signed by President Trump on August 13, 2018. Significant funding increases authorized by the NDAA include support for the Air Force RQ-4 Mods program and the MQ-9 Advanced Battle Management System with +$225 million total from their original requests, the Army MQ-1 UAV has been increased by $60 million to support the MQ-1C Gray Eagle Service Life Extension Program, and the Navy Undersea Warfare Applied Research program receives an additional $20 million for academic partnerships involving undersea unmanned warfare. The NDAA also decreased some programs related to unmanned systems. Program cuts include fewer MQ-9s for the Air Force Oversea Contingency Operations, reduced research, development, test and evaluation for the Navy’s MQ-25 and large unmanned undersea vehicles, as well a decrease in funds for the Surface Navy Laser Weapon System (SNLWS), a weapon system to counter UAS-mounted sensors.

Detailed information on both the President’s Budget request and FY2019 NDAA bill is available in the full report, which can be downloaded here.